From the blog at http://JohnWood1946.wordpress.com 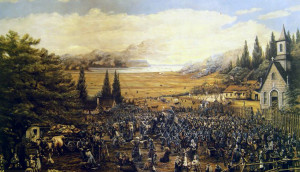 A depiction of the Expulsion of the Acadians, from Wikipedia

The Acadian Fugitives” article which follows was written by Placide P. Gaudet and appeared in The New Brunswick Magazine in the 1899. It is the story of an Acadian family who had escaped the Expulsion and had survived the winter of 1755-56 on a cold and lonely island. The story is a sentimental one, as it should be, since the head of the family was Pierre Belliveau, a great-great grandfather of Placide Gaudet.

’Twas in December, 1755. The once prosperous and flourishing Acadian villages and hamlets in what are now Annapolis, Kings, Hants, Colchester and Cumberland counties, in Nova Scotia, were no more. An unmerciful soldiery had turned them into flames, and most of their inhabitants were transported on board of vessels to the four points of the compass.