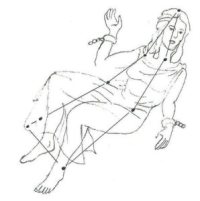 Cassiopeia, Andromeda’s mother, boasted that she was the most beautiful woman in the world, even more beautiful than the gods. Poseidon, the brother of Zeus and the god of the seas, took great offense at this statement, for he had created the most beautiful beings ever in the form of his sea nymphs. In his anger, he
created a great sea monster, Cetus (pictured as a whale) to ravage the seas and sea coast.

Since Cassiopeia would not recant her claim of beauty, it was decreed that she must sacrifice her only daughter, the beautiful Andromeda, to this sea monster. So Andromeda was chained to a large rock projecting out into the sea and was left there to await the arrival of the great sea monster Cetus. As Cetus approached Andromeda, Perseus arrived (some say on the…

Like Loading...
‹ Food Producers Use Flavoring Agents Derived From Aborted Babies
Creation of the Sun System and the Zodiac ›